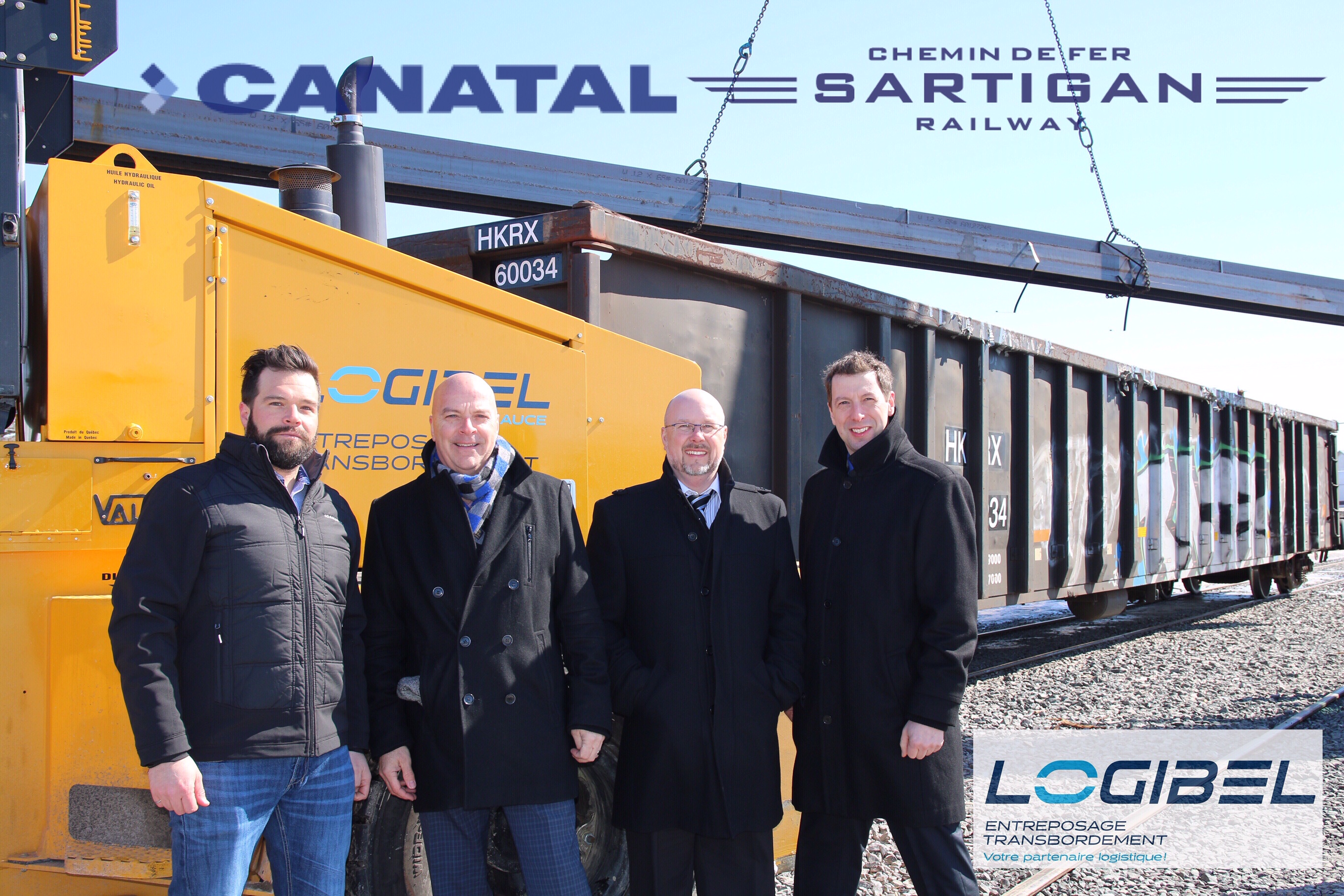 CANATALCANATAL transferred the delivery of its raw material by train from the Montreal area to the Beauce region. This decision came after several months of discussions between the steel structure manufacturer and its suppliers. The choice of Scott was made pending the resumption of rail service to Thetford Mines.

The first wagons were delivered to LOGIBEL on March 15th. CANATAL’s initiative supports the development efforts of the company led by Béland Audet and its partner Sartigan Railway, in Nouvelle-Beauce.

LOGIBEL is planning the construction of the Nouvelle-Beauce rail transshipment centre at Vallée-Jonction. This intermodal centre will allow the reception and shipment of goods by train. Temporary warehousing, as well as railcar unloading and loading operations will also be part of the services offered. Operations began in 2018 at a temporary site in Scott.

LOGIBEL also intends to set up a similar service in Thetford Mines. The centre would include adapted equipment to serve the needs of businesses in this region.

Towards the return of railway services in the Thetford region

The transportation of raw materials remains a very important issue for companies in the Thetford region. The results of a study conducted by Développement PME (DPME) in the summer of 2017, at the request of LOGIBEL, Sartigan Railway and Industries CANATAL, clearly demonstrated this. The traffic estimates resulting from this study amount to nearly 10,000 cars per year, thus validating the real traffic potential of the resumption of rail service in this region.

The use of rail logistics services in Thetford Mines would provide an opportunity for several companies to remain competitive in their sector. This type of transportation would also allow them to contribute to the fight against climate change, since trains produce 80% fewer greenhouse gases than road transportation.

Motivated by the data obtained by the study and concerned about reducing GHG emissions, about ten companies have made a commitment to the MTQ to use rail service as soon as it resumes in the Thetford region for the transportation of the required volumes of merchandise. Economic reasons, as well as the lack of drivers for road transport also prompted these companies to make such a commitment.

Since then, the promoters have obtained several unanimous resolutions from RCMs and municipalities along the section concerned in favour of the return of the train to the Thetford
region.

The globalization of markets and fierce competition require companies in the Beauce and Thetford regions to perform at all levels,” says Béland Audet, LOGIBEL’s Executive Director. “The continued development of logistics and rail transportation services in these regions would greatly meet their needs, in addition to allowing them to remain viable through the use of alternatives to road transportation.”

Negotiations are ongoing with other companies in the Beauce and Thetford region for the use of LOGIBEL’s transshipping yard services in Scott.

LOGIBEL, a company specializing in rail and road transshipping, has been offering logistics solutions to businesses in the Eastern Townships since 2005 and in Beauce since 2018. The company has developed expertise in rail and road transshipping at the local, regional and provincial levels, in addition to offering indoor and outdoor warehousing services.

Sartigan Railway’s mission is to provide railway management and operations services for the transportation of freight and passengers. The Beauce-based company is working to revive rail transportation activities on the Québec-Central rail network, which has been owned by the Ministère des Transports du Québec (MTQ) since 2007.

Industries CANATAL has been manufacturing and installing reliable, malleable and quality steel structures since 1990. More than a thousand projects have been completed in Canada and the United States by CANATAL’s experts. The trust and satisfaction of customers are a guarantee of success and ensure CANATAL’s enviable reputation in the steel structure industry.

Développement PME (DPME) is a non-profit organization that contributes to the economic growth of the Chaudière-Appalaches region by working to develop value-added businesses. For nearly 15 years, DPME has been working with its clients to be a key partner in their growth projects. Our experienced consultants have expertise that covers the entire value chain.

Check out all the news from LOGIBEL!